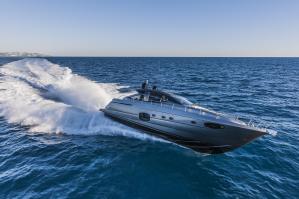 The Ferretti Group has now accomplished an amazing revamping of the yachts under 70 feet.  Also not to be  forgotten is the Ferretti 690 that totally took the boating industry by surprise in 2012.  It was declaced the ‘’Motor Boat of the Year 2012’’ due to the many innovations included on this yacht.

Now the Ferretti Group has announced the arrival of the new Ferretti 650 in October at the Fort Lauderdale Show 2014.   Inspired by the Ferretti 620, the Ferretti Group’s different departments from Product Strategy Committee , Marketing  department, Advanced Yachts Technology and Design and Studio Zuccon have now revealed the first photos and complete description of the 650.   Visit Ita Yachts Canada web site for full details.

Riva announced at the Miami show 2014, the arrival of the new Riva 86 Domino ‘’ Open ’’ and the delivery of the Riva Mythos 122 with its aluminium hull.

Remain certain that the Ferretti Group has not finished to innovate and maintain the quality of their lineup of yachts and that in all categories :  performance , sport , open , fishing boat , flybridge , motoryacht , megayacht , superyacht , lobster boat , trawler .