How to maximize the resale value of your boat 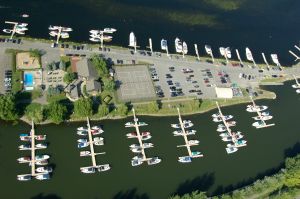 Everything starts at the time of your purchase.

We must be on the lookout for trends (new configuration, concept, design), recognize what makes life on board easy, comfortable and above all enjoyable, know which systems, which components are essential on board a boat, in short, everything that makes a boat the rare pearl on the second hand market that all boaters want to buy.

Nothing better than an experienced broker to accompany you during a purchase transaction. He is able to explain to you what the market will be in the next 5 to 10 years so that your boat stays for years highly sought after by those who are on the second hand market.

To do so you must understand the industry and especially the desires of boaters, trends, in short follow its evolution very closely.

In 2006 there was the beginning of the Joystick revolution with the arrival of the IPS PODS by Volvo (diesel) equipped with a joystick. Afterwards, the joysticks were extended to gasoline engines in the beginning of 2010 for both Volvo and Mercruiser, but in twin engine mode. Subsequently starting at Azimut exclusively (for 2 years), the gyroscope stabilization offered by the manufacturer Seakeeper towards the end of 2008 has completely revolutionize the stabilization thanks to the system installed aboard the boat without adding components outside of the hull (like the FINS).

Mitsubishi had first developed Gyroscope Stabilization, but Seakeeper has been the lead and has appealed more to the consumer boating industry.

Gyroscope stabilization consists of reducing the roll (lateral movement of the boat from left to right) by at least 80%, thus overcoming the pain of the heart. Of course, the effectiveness of Gyros Seakeeper or other is especially effective when the boat is at anchor. As soon as the navigation starts, efficiency decreases. Beyond 8 kn, it decreases very quickly. We must imagine that with this system, the boat at anchor will be stabilized at more than 80% with the result that the wine glasses will remain on the table despite the wave, no longer having to worry about boats passing by, everything remains stable.

Today, gyros are being installed in the center consoles and fishing boats especially as they are efficient at low speed, making it enjoyable for all aboard. Costs have dropped significantly, in 2010, a Seakeeper for a 55-foot cost about $ 120,000 USD, today it’s more than half the price for the same system installed on board.

The resale value of a boat, I would say 40 feet and more is going to be greatly influenced by the major options that are present on board.

The used buyer is always looking for the maximum options and eliminates the less equipped boat.

But the comfort options of navigation, high-end electronics, are virtually absent from class B boats, I call them Value Boats. Indeed, it is rare to see the stabilizers installed with manufacturers such Prestige Yachts, Galeon, Beneteau, Jeanneau, Bavaria, Cranchi, Atlantis, etc. but it is an option that can be ordered.  To this list, we must add almost all Searay, Regal, Meridian, Cruisers Yachts, Carver, in short almost all US manufacturers.

An exception, the Searay L650 contains basic Seakeepers, but this specific model is a Class A. Also, high-end Center-Console manufacturers like Boston Whaler, Everglades, Formula install a Seakeeper in their 40-foot models and above.

In 2020 (it’s in 2 years), the boat from 40 feet to 55 feet that will sell more easily will be the one with a patio door, diesel engine with a joystick, preferably with a SAT TV antenna, a powerful generator  with a soundproof enclosure, a kitchen when entering the boat, ideally with 2 or 3 bedrooms (3 bedrooms for 50ft plus), a Seakeeper stabilizer, toilet with separate shower, a full wetbar (ice maker, sink , refrigerator, grill) and if the manufacturer allows it, a hydraulic platform. I would add deck teak floors  and interior wooden floors . When talking about engines, it is also necessary to ensure that the engine power is adequate in relation to the weight of the boat. Unfortunately, there are too many submarine boats on the market.

The popularity of center-consoles of 40 feet and more, equipped with 3 or 4 outboard motors (large block 350 to 400 hp) are in full progression. They are evolving in a hybrid form, they incorporate the benefits of a big cuddy cabin, the front of the bow-rider, but with the characteristics of an open cockpit but with a new express hardtop and with an easy access rear platform.

In short, they appeal to new boaters given their versatility and power displayed by the new generation outboard engines that are very quiet and of course that incorporate a joystick.

But we have to distinguish the tastes of South Florida boaters from those who live further north, such as us in Canada, those of Maryland, the greater New York area, Boston and of course, the greater Great Lakes region, where it must be said, it is cold at the beginning and end of the season.

The purchase of a boat must be rigorous if you want to maximize its value or potential when reselling. Some boaters have a hard time selling their boat because they have neglected to consider all of these criteria. The brokers of Ita Yachts Canada are there to assist you, so why hesitate … There are a lot of $$ at stake.