Here is a preview of the ceremony that the manufacturer Azimut held in Portofino (Italy) during the official presentation of the new Azimut Magellano 25 Metri (25 meters or 82 ft) which took place last March.

Click here to watch the video of this unforgettable ceremony.

Immortalised in “Love in Portofino”, a famous Italian song of the Sixties, just the mere mention of Portofino conjures up a vision of timeless glamour. A magnet for celebrities during that golden era, its frequent visitors included such luminaries as Prince Rainier and Grace Kelly, Rita Hayworth, Elizabeth Taylor and Marcello Mastroianni. Today, it remains just as alluring, with George Clooney, Madonna and Denzel Washington just a handful of the names who are drawn by its special atmosphere.

What better setting, then, for the launch last week of the Magellano 25 Metri? A truly magical and significant day for Azimut Yachts began with a press conference held at the wonderful 700-year old Cervara Abbey with its magnificent gardens and breathtaking sea views.

Then, as the sun began to dip, guests stepped on board the Magellano, with the inimitable multi-coloured buildings of Portofino bathed in the soft glow of sunset creating a picture-postcard background. It could have been a film set…

And in fact, as guests moved to the town’s iconic square and sipped their drinks, the sky darkened and attention turned to a large screen where the opening images of the worldwide premiere of the short film “Open your Eyes” flickered to life. Its director Gabriele Muccino (internationally best known for “The Pursuit of Happiness” starring Will Smith) was present to introduce it and we will share more details of this very special project at a later date.

Once the closing credits had rolled and the resounding applause had subsided, our guests made their way back towards the dock where the star of the day, the Magellano 25 Metri, lit up the shimmering water and provided a fitting backdrop to the exquisite food arrayed before it.

And so, as a magical afternoon and evening came to its close, we think it is fair to say that more than one guest left singing “I found my love in Portofino…”

We would like to extend our heartfelt thanks to Ferrari Trento and Loro Piana for helping make this unforgettable day a success.

Click here for a presentation of the new Azimut Magellano 25M.

We are able to sell and deliver a new Azimut in Quebec, Florida or Italy before final delivery in North America. 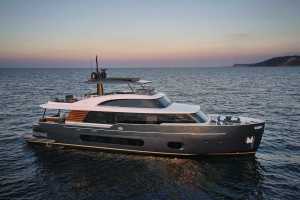 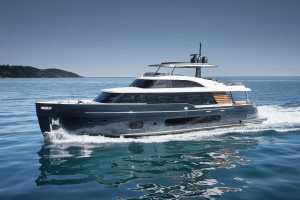 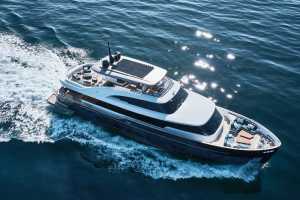