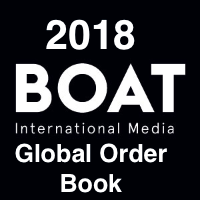 It is the table of the general classification which is obviously the most determining and the most publicized.

Again this year and for more than 18 years, the Azimut-Benetti Group ranks first. It is followed very closely by the FERRETTIGROUP Group and SANLORENZO.

The Italians dominate the classification with the top 3 positions. The Ferretti Group has several brands in the statistics: Ferretti, Custom Line, Pershing, Riva and CRN, which gives it an excellent position. In fact, it dominates in number of order, of unit, but not in term of length of yachts produced in total in meter.

In this respect, the Azimut-Benetti group is largely favored thanks to its Benetti division.

What is also interesting is the statistical analysis …

Italy dominates largely, followed by Germany and the Netherlands.

The famous shipyards such as Feadship, Amels and Heesen make the Netherlands the reference in the construction of SuperYachts. They do not possess the volume of the Italians, but their reputations are unequivocal. The resale value proves it easily.

Of course, the well-known shipyard Lurssen is German.

See also how Turkey stands out, several shipyards settle there, they build smaller yachts but their know-how is known worldwide.

But if we consider that the lengths (in meters) produced in total, Italy and the Netherlands are the big champions, leaving far behind all other countries.

The two major English shipyards (United Kingdom) which are Sunseeker and Princess Yachts are a little disadvantaged by the game of currencies, indeed the pound sterling is always more expensive than the Euro.

But the last few years have been difficult for the shipyards, groups like FerrettiGroup and Sunseeker have passed under Chinese interests and most likely other large groups will soon change hands. Sales volumes are no longer at the 2000-2010 level.

Even the smallest yards are affected, this year the Brunswick Group (USA) will sell its famous brand Searay, I wonder who will be the new owner of Searay. Nobody predicted such a thing in 2017.

The Ita yachts Canada Broker Team is available for any discussions. These data take on a particular meaning when you are in the purchase mode of a yacht. Knowledge of the market is part of our skills to make your purchase as interesting as possible.

N.B. The graphics and data come from the GLOBAL ORDER BOOK 2018 report published by the Boat International Media Group.